The week since Portumna has went well. If it had been sunny on Sunday I would have went for a recovery jog, but the day was miserable so I stayed indoors and pigged out instead - given that it was Fathers Day my family indulged me in this pursuit, so we were all happy. Since then I have run 28 miles over four runs with the legs feeling a bit heavy earlier in the week but coming round pretty quickly. I am a bit wary of my good form and half expect it all to end in a stupid injury, so i'll keep it relatively slow for a while although I will continue with a reasonably high mileage until I decide which direction to go from here - either down into the realm of 5k to 10k races or into the abyss that is 26.2+++, one things for sure is that my next PB won't be in the Marathon.

My 5k splits in Portumna were pretty consistent up to lap 6 and then began to fall away as fatigue set in, leading to an overall positive split of about 2 minutes 1:26:22 & 1:28:13. In the end though I had a 6 minute margin on Brian in third place (3:02:32), who obviously faded more than me, as he himself predicted. Funnily enough my first half split would have been enough to win the half marathon by about 20 seconds, which was won by a woman (1:26:45) who had a clear 90 second margin on second place. 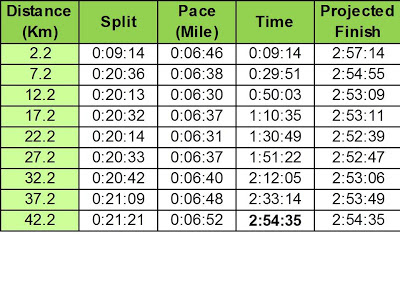