A trip to the Physio on Monday evening did not necessarily tell me anything new (Ewen's advice came later). As my IT band only becomes tender after an hour or so on the road there was no inflammation to inspect or tenderness to reveal just a tightness in my left IT band above the side of the knee (not where the pain was felt). She explained that the tightness could occur anywhere between the hip and the knee and still cause friction at the side of the knee as the whole band is pulled tight over the side of the knee (my words - but she said something like that). She gave the tender area a good going over so much so that sitting here 24 hours later it is still sore to the touch (as if I banged the side of my leg against a hard surface - is that normal?). She did give me a good stretching exercise (it so difficult to stretch the IT band at the right spot as the fleshy part towards the hip, which is not tight, is the first section to get stretched). Heat, stretching and some strengthening exercises are the order of the day. While she did not discourage running I agreed to take a few days off and return on Friday evening. Before that I will attempt a medium long run (probably Thursday morning) to see if I have any chance of running on Sunday. If I last 13 to 15 miles i'll give it a go - if pain comes i'll give it a miss.
Posted by Grellan at 21:48 5 comments:


On Monday morning I went for my usual 8.6 mile base run and towards the end of it felt a pain developing in my left IT band which got noticeably sore over the last 100m. I had assumed that I was developing ITBS which could take at least 3 weeks to recover from. I was hoping that I had diagnosed it early and that a few days rest would see me good (eternal optimist). With this in mind I skipped my mixed interval session on the track on Tuesday and did not run on Wednesday either.


I did run on Thursday morning but not my scheduled 2 x 4 miles @ HM pace but instead opted for an easy run over 8.6 miles to test the water. As the symptoms of ITBS do not necessarily present themselves straight away and usually take a while to appear I was cautious during the early miles. I did feel the onset of some pain after 5 miles but thankfully it appeared to subside after mile 6. I did a similar run on Friday morning at a slightly faster pace (still within base pace range) and completed the run without feeling any aches and hopefully thought I had avoided any serious disruption. However my scheduled 22 mile run on Saturday morning was the acid test.


I headed out the door shortly after 6 (Ani is making her first communion today so I had to get out early) with only 5.5 hours sleep in the bag. I maintained a reasonable effort which felt tougher over the first few miles but settled down after a while. I ran into Cork along the Model Farm Road, past the College, along the south quays, crossed the river at City Hall and back along the north quays - feeling pretty good. Up Sundays Well (tough 0.25 mile hill) and shortly after the nine mile mark the pain came on my left knee and I stopped and walked for a few minutes and started up again only to feel the pain again after 0.3 miles so I called it a day. I was a tad pissed off to say the least as I had been looking forward to seeing how long I could have maintained the pace. As I was 6 miles from home I called Abina who called a cab for me as she was heading to the hairdresser with Ani.

This is certainly a disappointing development and puts next weeks half marathon in Bantry in jeopardy. I haven't yet signed up for the Cork Marathon (9th of May is the closing date) - so how I get on over the next week to 10 days will tell me whether I should enter on not. On a plus side Ani had a great day and the sun came out to shine after a wet start to the day. 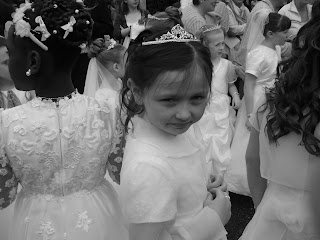 I don't know whether to take complete rest or do short runs below the threshold for the onset of ITBS - time to see a physio I think.

Guinness Is Good For You 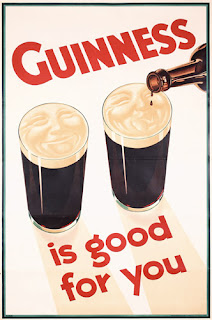 Soaring with the Eagles

Took delivery of one of these on Thursday morning so I just had to try it out on a recovery run Thursday evening. I won't post up any of the graphs and charts firstly because I don't know how and secondly I am still trying to figure it all out (thirdly I think they are of little interest). I think the elevation function is a bit out as Friday mornings run suggested I fell off a 180' cliff on leaving the house (well a -51% grade is a cliff to me) only to return and find my house at the bottom of said cliff (glad I didn't have to climb it as my legs were shattered - result of a tiring week finally catching up with me).
.
My legs were somewhat recovered on Saturday morning for my base pace run. There were (and still are) a few aches in my glutes but nothing to worry about. As my base pace range is now largely below 8 minute miles (07:17 to 08:06) I decided to run towards the lower end of the range to separate it from my recovery run pace. I played it by ear on the distance setting out on an 11.5 mile loop but took a diversion in the regional park on the way home finally finishing up with 13.2 miles under the belt (07:28 pace). I was hoping it wouldn't impact on the 20 mile long run I had scheduled for this morning.
.
Woke to the alarm on my phone this morning at 06:30 as Pat (next door) and I had scheduled to meet with a couple of seasoned runners from Eagle AC at UCC Farm at 7:00 to go on a 20 miler. We met up with Joe and Pat shortly after 7 (the rest of the crew were heading up to Kilnaboy in County Clare for the fourth and final of the Munster Series 10 Mile Road Races). We headed South West out of Cork on the Bandon Road taking in a hilly loop which brought us back into Togher by mile 8 - these hills were certainly steeper than the ones i'm used to - great training for the hilly Half Marathon Bay Run next month. Joe and Pat appeared to amble along taking it all in their stride (I want some of this hill endurance). Our last serious hill up towards the airport was the steepest of all (with the grade showing 20% in spots) and was certainly tough. However we recovered well on the downhills and joined the City Marathon course for about 6.5 miles through Ballypheane, the Lough, Glasheen, Wilton, Model Farm Road and Straight Road. We picked up the pace along this section getting under 08:00 and down to 07:30 for the later miles. I still felt reasonably strong as we made our way back to the UCC farm by mile 18.8. We covered a large lap of the football pitches at the farm coming in at 21.05 miles in 02:48:22 (08:00 pace on the button). The last few miles around the pitches were tiring but altogether the run was very enjoyable and a very positive training experience. I will certainly return.
.
Have a good week.
.
Thur 10th Apr
4.15 Miles in 33:06 (07:58 pace @ 129 HR)
.
Fri 11th Apr
8.6 Miles in 01:08:20 (07:58 pace @ 130 HR) - Dead Legs
.
Sat 12th Apr
13.2 Miles in 01:38:38 (07:28 pace @ 136 HR)
.
Sun 13th Apr
21.05 Miles in 02:48:22 (08:00 pace @ 131 HR) - Hilly at Start
.
.
Marathon Training Week 17/24 - 82.8 Miles. (Didn't know it was that high)
Posted by Grellan at 13:23 2 comments: