One of my other little holiday experiments involved carbohydrate deprivation for two weeks as part of a carbohydrate intolerance test recommended by Phil Maffetone in his Big Book (my holiday read). The idea behind the test is to severely restrict carbohydrate intake for 2 weeks (no high- or moderate-glycemic carbs, no fruit even) and assess the impact on physiology, energy levels etc. before gradually weaning myself back onto various carbohydrate sources and assessing their impact to see if they have an adverse effect (e.g. wheat). Dr Maffetone swears by this test citing it as
"the best way to jump-start your metabolism because it quickly shifts the body into a higher fat-burning state." and that "tens of thousands of athletes have used it as a necessary platform to get healthy, lose body fat and significantly improve aerobic function and overall endurance."
Before I had finished the sentence I had started my very own two week test, ignoring the recommendation that "The two week test is best performed during your aerobic base period"
To assess "before conditions" I should have completed a 5 mile aerobic test at my 138 MAF (Maximum Aerobic Function) Hr. As I was nowhere near a track I skipped this. In any event, I had my doubts that I could improve my aerobic function, given my recent form. Still I was excited to see what the impact would be. The first few days to a week were not too bad, but as I entered the second week I was getting a bit weary of the diet (plenty of eggs, nuts/nut butters, cheese (unprocessed) meat and vegetables) which was quite repetitive, and I noticed an increasing craving for sugar. I came off the deprivation yesterday and can confirm that sugar coated crusty raisin loaf has little or no impact on my physiology or energy levels, apart from the fact that  I found it difficult to stop after 3 or 4 slices.
In fact the biggest impact of the whole experiment was the complete lack of energy for the first few miles of most of my runs, some of which were well above 9 minute pace. However I was equally surprised at how well my energy and pace picked up after I got over these 2 or 3 opening miles - one on the main recommendations of Dr. Phil is the 10 to 15 minute warmup/cooldown starting and ending at walking pace, the point being to gradually ramp up from your standing Hr (say 70) to your exercising aerobic Hr (say 130), which is the most efficient way of mobilising your limitless fat stores as a fuel source and minimising the burning of your finite reserves of carbohydrate fuel. The longer the distance the more important this becomes (e.g. the 6 mile cut-in approach to marathon racing).
As my next race will be nearly 4 times marathon distance, mobilising the maximum ratio of fat/carbohydrate fuel mix from the off is probably the single most important thing that will ensure I have the best chance of finishing in a decent time as the aim is to stretch my carbohydrate resources (preloaded and what I can ingest during the race) for a long as possible as I can't burn fat on it's own (fat is like the log to the carbohydrate flame - if there's no flame the log is feck all good to you) - and I don't want to spend the last 20 miles crawling on all fours burning the very muscles I need to get me to the finish line.
Jamie's post last week gave the best analogy of how I think our fat burning engines work most efficiently (although his analogy was on consistent training) - that of a big heavy ocean freighter that takes an age to build up speed, crawling along even at full throttle until it reaches its cruising speed which it can maintain forever, even if you ease back a little on the throttle - solid, dependable, reliable, enduring - granted there's no sprint finish with this engine.
I don't expect to feel as lethargic at the start as I did during my "carb depleted" runs. I was lucky that one of these runs - pacing the 3:30 group in the Killarney Marathon - started with a net 5 mile downhill section, which helped me ease into the effort without too much trouble, although the warm day proved challenging, with Tony (my fellow pacer) and I coming in alone, having lost our last pacees before mile 20 - 18th out of 212 finishers in a time of 3:29:33
I finished off my 2 week experiment with a 5 mile MAF test at the track this evening, with the results showing little change over my previous 2 tests in March and May. The slight dis-improvement since May, is probably within the margin of error of my Garmin HR monitor. 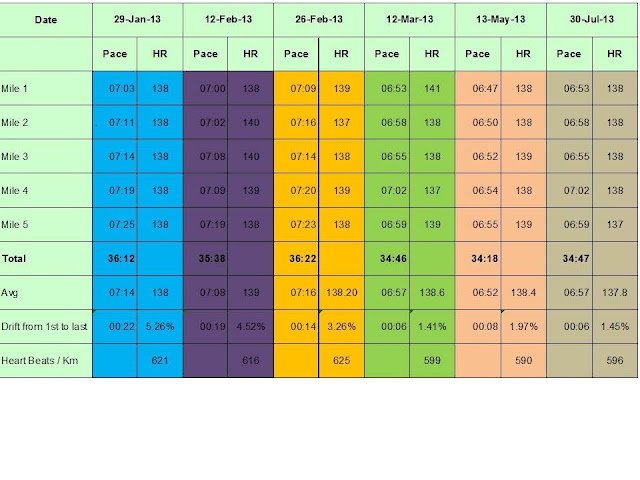 I spent that last three weeks conducting a few experiments to see how my body would react to a few different stimuli, the outcome of which would help me decide  my next race. As I was on holiday I did not have the distraction of work to get in my way.


The first week was all about getting long hilly miles into my legs to build leg strength and further boost my endurance base. As I was in Waterville for the week I took to the  hills of the Kerry Way, with more than 50% of my running (and walking) off road. Rather than tire myself out with a single long run each day (the aim was to cover 20 miles minimum daily) I split most days into morning and afternoon runs, which fitted pretty well into the family schedule as my first run (and shortest) was done and dusted before the kids rose in the morning and the second run while they were at a 3-hour summer camp at Derrynane Beach. The sun was splitting the stones each day, which meant I carried a backpack with a 750ml bottle of water and a sugar hit (apple/pear) for my afternoon forays.


As the week wore on the start of each run became more and more sluggish but surprisingly there was none of the expected muscle soreness of repeated runs on unfamiliar hilly terrain and after the legs warmed up each run felt the same as the one before - perhaps my pace suffered but it was difficult to tell given that most runs were different and average paces varied up to 13:30 per mile (the views were worth it though). As the kids had no camp on the Friday I decided to complete one long loop of the Kerry Way, starting and ending in Waterville, leaving shortly before 6 with the exact distance unknown but somewhere close to  a marathon. I arrived back in Waterville shortly before 11 with about 25 miles on the Garmin so I decided to do a loop of the town to get up to 26.25 and cooled off in the sea - which was the standard cooldown each day.

The113 miles for the week is just 1 mile short of my longest weekly mileage but with 15,000
feet of elevation gain over the 5 days (Saturday and Sunday were rest days) it was the most challenging, slowest (average pace of 11:08) and most enjoyable weeks running, jogging and walking. If I add in the twice daily long runs of the previous Saturday and Sunday the total 7 day mileage amounts to 156 miles (avg 22.3 miles per day) - not quite 10 in 10 but good enough for me. After that I was pretty sure what my next race would be.

The Waterford Viking Marathon last Saturday was my 40th Marathon/Ultra and 13th this year - I certainly have gone off the deep end over the last few months. Technically Waterford was an ultra as mile 1 was in fact 1.2 miles long, adding 0.2 miles to the overall course. This was not confirmed to us until Mile 21, which made pacing the 3:15 group all the more difficult. We were over a minute behind at all the early mile markers, not willing to push the pace to catch up in case the overall distance would come good. When we crossed the halfway timing mat in Tramore about 40 seconds behind our 13.1 mile target we decided to start banking a little more time as insurance against the possibility of having to run a longer course.
The sun came out as we hit the sea front at Tramore making for more challenging running conditions, particularly on the short sharp hill up through the centre of the town. From here to the finish the rate of attrition began to increase and the temperature increased as we returned along the undulating road to Waterford.
By mile 21, when I was told that the course was actually 0.2 miles longer, I was about 5 seconds behind on the mile marker and only had two runners on my shoulder. Over the next couple of miles these two fell off the pace, which was made all the more challenging by the fact that I had to increase the pace marginally to build some cushion on a 3:15 finish. While it may not have appeared much, increasing the pace by 5 seconds per mile over the last 5 miles of a marathon, can be the straw that breaks the camels back for those that are running at the limit of their ability. My fellow pacer was about 40 seconds ahead of me at mile 23, obviously more concerned than I about making the 3:15 deadline ;-).
The last few miles of the course was all about trying to encourage those that I came across to run with me to the finish, with all but one unable to take me up on my offer. So over the last mile I had one guy with me, who ran ahead to come in under 3:14,  followed by yours truly in 3:14:27 - delighted that I had the endurance base to complete the course the day after racing a 10k PB. One of the guys who had dropped off the pace at mile 22, suddenly came sprinting out of nowhere to collapse across the line a few seconds under 3:15, straight into a waiting wheelchair and the medical tent - reminiscent on my own wobble across the line in Dublin 2011.
Apart from the serious error over the length of the opening mile, the marathon was well organised and supported on what turned out to be a beautiful if somewhat warm day on an interesting and challenging course. Apparently the City Council extended the barriers on the mile 1 out and back section along the City Quays to avoid roadworks, inadvertently adding 0.2 miles to the course without informing the organisers!!!

That's the end of marathons for a few weeks as I am steering clear of the Sixmilebridge 10 in 10 in order to save my marriage ;-) With 2 down and 8 to go, best of luck to all those competing.
Posted by Grellan at 23:45 3 comments: