I knew during the first mile of my 5 mile constant heart rate (140 bpm) evaluation run at the track this evening that I was well behind on my previous evaluation 4 weeks ago. Still I persevered with the 5 miles which I covered in 35:23 (7:05 pace) down from the 34:40 (6:56 pace) I recorded on 28th February. I wasn't too concerned given that the temperature this evening was about 5C higher than for all my previous evaluation runs, although I doubt that it accounts for the full drop in pace. Perhaps there were other things at play (maybe an off-day) as I doubt that I have lost that much of my aerobic base. Also the fact that the fastest mile was mile 3 suggests that the HR monitor may have been acting up.﻿﻿
﻿
﻿
﻿ 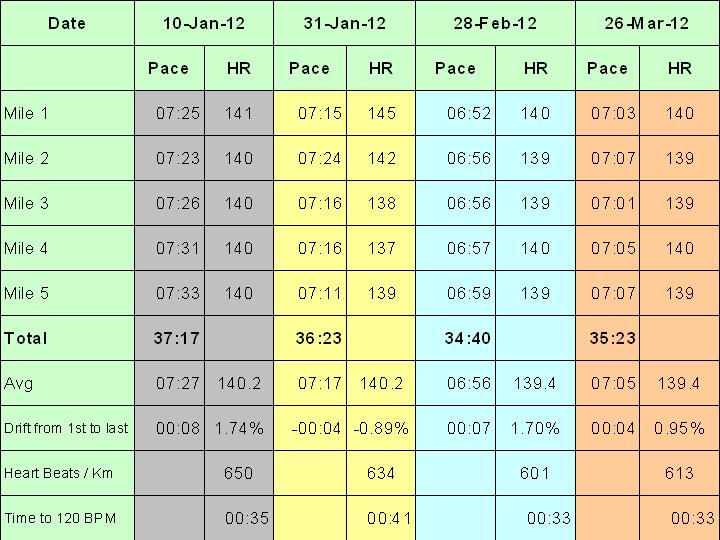 
Anyway, nothing I can do about it now - the real test of my endurance base is coming up on Sunday. ﻿﻿Last year I averaged 6:53 pace for my pre-Connemara Maff test  but didn't get the chance to test my aerobic fitness as it was my muscular skeletal system that was the limiting factor. This year should be different.

My primary goal remains a sub-5:15 finish, but if the body and conditions on the morning are both good i'll set a more ambitious pace and see what happens. I have a couple of pre-race ideas, but will be largely running by feel as opposed to being a slave to the watch. If the temperature remains high (it's forecast to drop) i'll certainly be heading out a bit more cautiously. As for fuelling, i'm less prepared (and less concerned) than last year. All I have taken during training is a few gels for my 30 mile long run, so I don't think I will need to pack like a mule horse - although I will make use of the drop bag system to stash the obligatory bottle of coke and perhaps a botle or 2 of perpeteum, left over from last year.

It late in the evening so i'll be relatively brief. I got my 10 mile PB in Mallow today, but for the 28 seconds I knocked off my Ballycotton time 2 weeks ago (21 second PB) I went through a whole lot more suffering. Whereas in Ballycotton I suffered during the last mile (and still ran it in 6:02), today I suffered pretty much for the second half of the race. The race was also a polar opposite to Ballycotton, whereby my 55 second negative split two weeks ago was replaced by a 39 second positive split today - to be quite honest it felt as if it was worse, so perhaps the struggle over the second half of the race limited the damage.

﻿﻿﻿
﻿
﻿ ﻿﻿﻿﻿﻿﻿﻿﻿ ﻿﻿﻿ ﻿﻿
I started off a few rows back (in hindsight I could and should have started up front as there was no timing mat at the start and the first 400m was a struggle to stay upright as I dodged in and out between slower runners). I shared the first mile with Brendan and despite the fact that it contained a reasonable climb we managed to churn it out in 6:18. The road levelled out during mile 2 as we turned left onto the Cork/Mallow Road - Mile 2 in 6:15 (a bit surprised that it was not much faster). Clubmates Anne-Marie and Colin were 30 yards ahead (both with PB's well under 62), with John O'C 10 yards further ahead (PB about 61:58). I ran at my own pace and closed the gap over the gradual downhill mile 3 which came in a relatively fast 5:53. Turn left onto the Killarney Road - took a drop of water at mile 3.5 and joined a group with Colin and Anne-Marie - sharing the lead so as to shield the others from the frustrating head wind - Mile 4 in 6:07 (feeling relatively strong). Shortly after Colin and Anne-Marie began to pull ahead slightly - Mile 5 in 6:16 and halfway in 30:49.
﻿
﻿

I thought that if I could maintain pace and even split the race I'd get comfortably under 62 minutes. That was a big IF though, as there would be no repeat of the downhill 5:53 mile 3 during the second half. We turn left away from the headwind and onto a minor road with a few short ups and downs and I began to feel the pressure. Colin and Anne-Marie are about 10 yards ahead in a small group of runners, including Tom Sheehan of Bandon AC, whom I had shared a few of the middle miles of the Clonakilty Marathon with last December - he was looking very strong today. Mile 6 came in 6:16.
At this stage maintaining pace relative to those in front was becoming uncomfortably hard and there was no thought of trying to close the gap - just the negative thought of "when is the gap going to open up...I don't know how I can keep the pace going" To reinforce this negative feeling Mile 7 came in 6:26 which is my slowest so far and a real dent in my confidence as it is all I can to to maintain the effort. All i'm thinking of is the number of minutes left to run. A guy came on my shoulder on a short incline and I was fully expecting him to pass but I appeared to have a faster pace on the flat and declines and he yo-yos back and forth behind me for a mile. Mile 8, coming in 6:12 explains why I am still on the tail of Colin and Anne-Marie. I keep the leg speed going but the effort is becoming more and more unsustainable. Still I maintained pace compared to those in front with one or two of the group coming back to me. 1 guy , in particular shared most of the last 2 miles with me.
Mile 9 comes in 6:20. Just hang on for 6 more minutes. I keep the pace steady, knowing that I have nothing in my legs for the typical push over the last half mile. Left onto the Bridge over the Blackwater - 5 minutes left - cross the bridge and left again - 4 minutes left. The guy beside me begins to pull away, Colin and Anne-Marie also increasing the gap as the paces quicken in anticipation of the finish line. I am just hanging on, no zip left - just a minute left as we approach the last corner - I am passed by 3 guys in quick succession and have no response - legs like jelly - 50 yards left - I hear applause for someone behind and with the finishing line in sight my subconscious allows me to quicken the pace for the brief sprint to the line - 6:14 for the last mile - nothing like the strong 6:02 final mile in Ballycotton and 1:02:17 for the 10 mile PB. Glad of the PB but disappointed that I didn't get under 62 minutes.
I can't explain why I found the race so tough compared to Ballycotton - there's a fine line between comfortably hard and uncomfortably hard and I must have crossed it today. Certainly the day was warmer and the headwind didn't help - but I don't think they were much of a factor. Maybe there's a lot to be said for the slow start in Ballycotton - should I have aimed for a 31:00/31:20 first half so as to set myself up for a 30:40/31:00 second half? Still tough, considering my 5 mile PB is 30:24. Maybe last weekends 30 miler was still in my legs. Interestingly it took me more heartbeats to complete todays run compared to Ballycotton (627/km compared to 623 two weeks ago - and they say Ballycotton is tougher) Either way 62:17 was all I was capable of today and that's my first PB of the year, not bad for an old guy of 46 I suppose. The results put me in 78th place out of 1,088 finishers and 12th M45 (there's a few faster old guys out there). Well done to Mallow AC for puting on a fantastic, well organised race.

I'll leave you with another table comparing some of my shorter distance PB's with the corresponding times for these distances I ran today - maybe it's time for some short race training. Have a good week.

I ran a grand total of 19 miles this week, not by design but more because other priorities took over and as the work for Connemara is done there was no point in stressing out trying to get a few more miles in.
.
I did complete my final race specific long run last weekend, covering just over 30 miles in 3:48 (7:34 pace @ 139 HR), although my pace did slow to 8:00 over the last few miles. Still, an encouraging run. A 12 mile recovery club run in the hills to the south-west of Cork the following morning went reasonably well at a very manageable 9:07 pace and equally manageable average HR of 108 - dropping to as low as 92 on one downhill section. My legs felt a bit sluggish for a few days but recovered sufficiently for my Tuesday "speedwork" which I cut back to a 5 mile progression @ 6:46 pace average (about 7:07 to 6:36). My other 2 runs of the week, on Wednesday and Friday, went off without a hitch - however tomorrow's Mallow 10 mile PB attempt will be the real test as to whether or not I am fully recovered. After that it's back to 2 weeks of easy(ier) running.
.
Here's an interesting video on running economy I came across on the Natural Running Center Site.
.
Posted by Grellan at 20:23 3 comments: 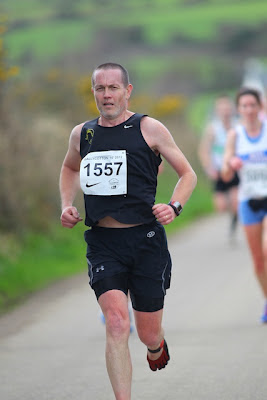 Recovery from Ballycotton has gone pretty well. While the ball of my left foot was quite tender it did not prevent me from running on it, albeit in normal running shoes. With the Connemara ultra now less that 4 weeks away I have only planned 3 specific runs between now and then.
.
The first and only ultra specific run is this weekends long run, where I hope to run 30 miles or so (3:45 to 4 hours hopefully). This time i'm planning on taking on some fluids and maybe even a gel or 2.
.
The second, on the following weekend (Bank Holiday Monday), is the Mallow 10, where I hope to break my 10 mile PB, given my Ballycotton performance. I know Paul advised caution so close to Connemara, but I think 13 days should be enough for recovery - i'll see how Ballycotton impacts on this weekends long run and reassess.
.

My third planned run is a final 5 mile constant HR evaluation run a week before Connemara to assess my aerobic fitness before race day. All my other runs will be based on feel with a few faster paced runs if the mood takes, always mindful of erring on the side of caution during the Connemara taper.

Ballycotton 10 - Not What I Expected