With the Clonakilty marathon only 13 days away (I must remember to sign up for it) I completed my one and only race specific workout today, heading out of the house shortly after 8:30 this morning for a two and a half hour run. The plan was to run in a reasonably glycogen depleted state so, as for all my morning training runs, I had no breakfast and also left the gels at home. The aim was to encourage my body to burn more fat at a moderately hard aerobic pace, so that on race day my glycogen stores will last longer.

Instead of heading east towards the City I turned west heading into the hills between the Bride and Lee valleys on a beautiful sunny morning. As Clonakilty has a few hills along the course it was hills I was looking for. With a long hill at mile 3 using the 4 or 6 mile cut-in wasn't going to work today so i just eased into a pace under 7:30 until I hit the hill. My target was to average 7:30 pace through the hills taking advantage of the downhills to compensate for the slower uphill sections.

Things went pretty much to plan over the first hilly 8 miles, in fact I was a minute ahead of my 7:30 target. With a half notion of getting under 3:10 in Clon, I dropped the pace towards 7:10, which I maintained pretty much to mile 19 - passing 13.11 in about 1:35. Over the last few miles the effort of maintaining pace was increasingly stressful and it eventually dropped to 7:31 for mile 20, which I passed in 2:24 - still ahead of my notional 2:25 target. I kept going until 2:30 was on the clock and was glad to stop - 20.83 miles (7:12 pace & 144HR Avg). If i'd kept going my pace would almost certainly have dropped to 8:00 and slower as fatigue was well and truly setting in. Hopefully the hills in Clon won't be as tough and i'll be a little more rested.

One thing I had not planned for after the Dublin Marathon was the lack of a medium/long term goal. What am I to do now? While I had planned and trained to break my half marathon PB in Charleville on 18th September there was no target time. The plan, hatched in late July, was still only a diversion on a longer road, something to keep me amused en-route to a greater destination. Where was I really heading - a 15 mile PB 2 weeks later? again another thing to keep me amused (and motivated) on my journey. And then the fog began to clear a little and I could see a greater prize, much closer than I thought. Is this where I was aiming for all along, suddenly within reach, is the pilgrimage over, is this the road I should take, I didn't have much time to think - probably a blessing in disguise - and swerved off the road without indicating and the rest is history.

Now that I have arrived do I stop here? final destination, settle down, eat sleep and be merry, content with life. What about the journey? wasn't it fun? isn't that what it's all about? can't stay here forever! But which road do I take? does it really matter? Pick one and the next long term destination will reveal itself when you're ready. One things for sure you got to keep moving.
.
So I am back on the road, after a week of eating and sleeping. 2+ kg heavier, so no shortage of fuel. Before diverting to Dublin I had planned on running the Clonakilty Waterfront Marathon on 10th December and while I haven't signed up yet I think i'll stick to that plan, in the absence of anything else. I had a notion, pre-Dublin, that I could PB in Clon - a tough ask on a hilly course but since I PB'd in Dublin I can relax a little - no pressure - treat it as an experiment - another 6 mile cut-in or maybe a 13.1 mile warmup to a 13.1 mile race. We'll see.

My recovery from Dublin followed a predictable enough course and while my HR for a particular pace may still be higher than it was before Dublin everything else appears to be back on track. My speedwork at the track was initially at MP and an attempt to join the 6:00 mile pace group for 3 x 2k last Tuesday was met with a "you're not that good so piss off back to a slower group" from my body which bailed after 400m into the 3rd 2k. To be expected really as I have not trained at that pace all year - shows the importance of specificity. To be quite honest I was aiming for 6:20 pace, but the choice was 6:48 or 6:00, unless I wanted to run on my own.
.
No problem with recovery though as I managed to follow it up the night after with a 39:30 10k (6:22 pace) in the Run for Mark in the Dark Charity 5k/10k in Cork. The race, over 4 x 2.5k laps (2 laps for the 5k) on the flat Monahan Road/Center Park Road loop, was well supported. My reason for entering was to support a worthy cause - something positive in all the doom and gloom. The fact that there were two races with the start/finish at the same location (so maybe not exactly 5k/10K) with a clock to see progress after each lap made it more interesting than most races. My plan was to run by feel, head out at a comfortable pace and see how I get on - certainly not looking for a PB. The clock showed 10:06 after the first lap, which automatically reset my internal governor to a sub 40 minute target. I just kept the pace comfortably hard and the 2nd lap came with 20:01 on the clock - I resisted the urge to chase down a guy who passed me racing for the 5k finish line as I was in a 10k groove. Lap 3 was less comfortable but still manageable - 29:53 on the clock. I continued the pace heading into lap 4. The course got progressively congested between laps 3 and 4 as slower runners running 3/4/5 abreast prevented me from taking the racing line - jumping onto the footpath, splashing through puddles - all part of the fun. I reeled in and passed a few runners on the last lap as my pace increased slightly, crossing the line in 9th place in 39:30 - although the results give me a 39:41 (adding 10 seconds to my first lap)
.
.
Posted by Grellan at 20:04 3 comments:

Oh the struggle of it all

My brother, who knows his way around youtube, posted the TV coverage of my marathon finish. Although his remixed extended version is far funnier. he'll make a career in movie production yet.
Warning, I do not look as pretty as Scott did at the end of the Osaka Marathon.
.
Posted by Grellan at 23:45 7 comments:

79
My average weight in kg over the last 2 months, down about 3 kg from my average racing weight over the previous 3 years (although I was 86kg at the start of this year). I reckoned my previous 82kg would get me a marathon between 3:08:58 (my 2009 PB) and 3:14, depending ontraining/form etc and that a weight of 76 kg would get me anywhere between 2:55 and 3:00, all other things being equal (i.e. training, motivation, etc.). Not in the least scientific but what is? Anyway it gave me something to focus on. For a runner I am still on the heavy side of the spectrum with a BMI of about 23.5. - could I reduce it to 20.5 and run a 2:40/45 marathon at 70kg??? Would I want to put myself through the sacrifice? Anyway I jumped into a marathon 3 kg off my 76kg target (more an aspiration than a target as I was not seriously chasing it) and scraped under the bar, probably because my form was better than ever before. My empirical formula would have given me a 3:02 to 3:07 marathon for 79kg.

27th
M45
2:58:37- 2:58:51 (253rd to 259th) Clock time and position of lead and last 3 hour Pacers.
I finished 38 seconds behind the last pacer - no wonder I thought I wouldn't make it over the last 100m. If the lead pacer had been 30 seconds further behind me at mile 25 (heading for a 2:59:07 clock finish) would I have run most of the last 1.22 miles at a more even and manageable 7:10+ pace, taking me to the finish line in more or less the same time without blowing up or was the 1 minute cushion the pacers had a blessing in disguise, getting me to push as hard as I could.
I had switched to overall time on the Garmin at about 2:38 - mentally saying that I had 20 minutes of pain left - and counting it down in 5 minute quarters. Once the pacers passed before mile 25 (2:50:xx) I stopped looking at the watch and just concentrated on sticking to them. I only looked at the watch again when I got dropped, but at that stage my mind was in no position to make any sort of analysis - so seeing 2:57 on the watch, when I had no reference to a finish line or the pace I was running at, was meaningless other than to instill a general sense of urgency/panic - just about when I had that one-way communication with my legs.
.
Posted by Grellan at 22:05 1 comment: 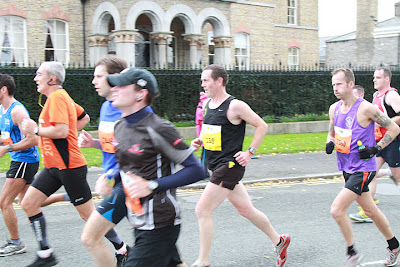 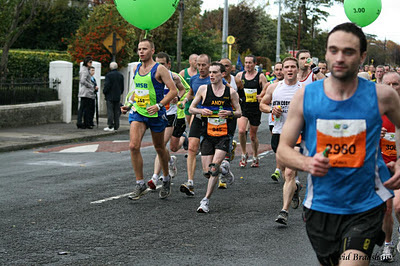 From leaders to those who came in around 3:10/3:15
I run past 16:45 minutes in followed 8 seconds later by the lead 3 hour pacer. Glad I didn't know he was that close. He didn't pass me for another 4.5 miles.
25.5 Miles - Sequence of Photos by Clubmate Joe Murphy Zone of Pain 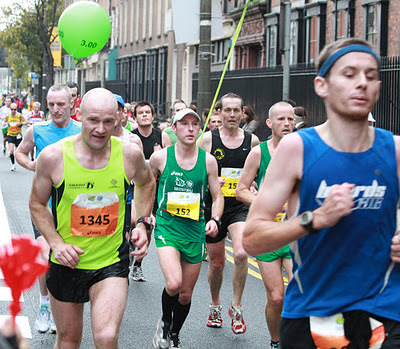 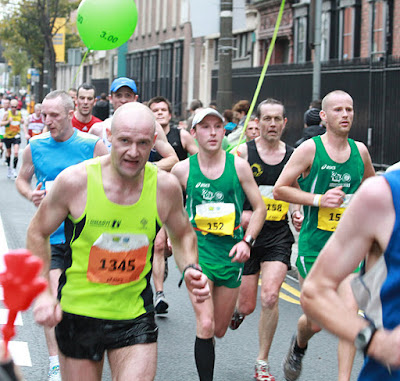 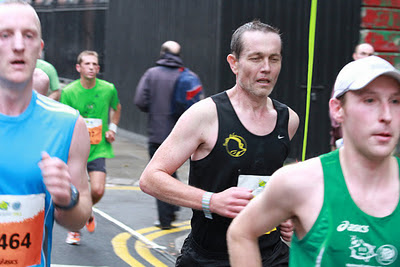 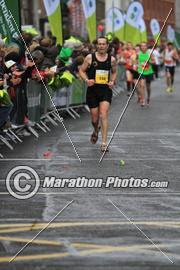 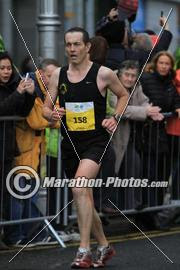 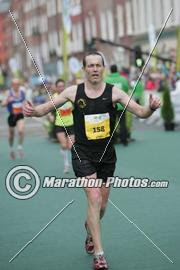 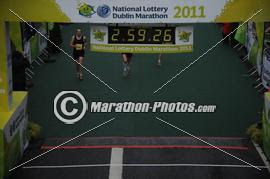 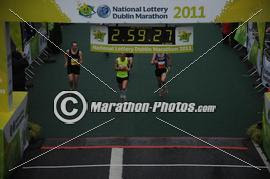 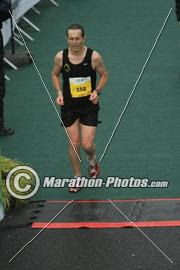