Two weeks down. A busy work week means my weekly (run) mileage was relatively low at 56 miles over 5 sessions. I currently aim for 3 quality sessions each week, 2 dedicated to the Marathon in March and 1 with an eye to the Ironman in September, consisting of a long cycle with Adrian (also signed up for the Mara and the IM) on Sunday morning of between 3:30 and 4 hours, followed by a solo run of up to an hour (typically @ 7:30 pace) - this session is primarily an endurance challenge and requires a bit of refuelling (chocolate/banana milk) between the bike and the run and  a good feed at the finish - the bike brings out the hunger more than running. I have also started to get a swim in on Saturday afternoon (typically 1.5km). I'm squeezing a lot into the weekend at the moment and the back to back sessions are tough, with only one recovery day until the Tuesday speed session. The plan is to up the time on the bike once the Marathon is out of the way in March - good ultra training apparently.
My 2 marathon training session consisted of an endurance speed session on Tuesday and a long run on Saturday - although the speed session is also pretty long. I'm not quite in the same shape as I was in 2013, partly due to the fact that I am about 2.5 kg heavier than I was then. So I know what I have to do.

I have just finished my first structured training week in nearly two years having dusted down the marathon training programme that got me two PBs in the summer of 2013. Back then I had the relative luxury of starting my training plan in April after getting one or two decent races under my belt. This year I was still enjoying the tail end of the Christmas excesses when the programme was scheduled to start.
As it is not a beginners programme it does require a good endurance base and a decent anaerobic base before you start. While I had no problem with the endurance base my anaerobic base was largely non-existent so I was prepared for a baptism of fire in that regard. To allow some bit of a lead in I cut the programme from 10 to 9 weeks, still keeping the total number of quality sessions.  I thought it would be a good idea to compare my key training sessions to those of my 2013 marathon build-up, which will give me a better indication of what I could realistically aim for in Barcelona.

It's been a while.................. my longest absence since inception. I've sat down to put pen to paper a number of times, wrote a few lines and then abandoned it. On the plus side my running has fared a bit better although there were a few months where I was just going through the motions - not enough motivation to spur me on to new challenges and not enough apathy to fall off the wagon completely.
My weekly mileage after the Belfast 12 hour in July was a bit hit and miss and lacked focus. That is despite the fact that my recovery after the race was the best it has even been so it wasn't physical. I had a half notion of ramping up for the Dublin Marathon at the end of October, but when I missed a few track sessions to get me up to speed before starting a 12 week marathon programme I mentally  relaxed and let the whole idea slide. I was keen to run the inaugural Glen of Aherlow 39.3 mile ultra on 20th September, signed up for it late and managed to get around the course without too much difficulty, although I did fall once or twice on a technical section of the course and finished in about 6:26, well down on where I would have liked to be but no more than I expected based on my lack of training and a generous diet - fighting gravity is so much harder when you're carrying excess baggage.
The low point in my training cycle came when I pulled up with a strained hammy 9.5km into pacing the 30km Human Race in Limerick on 5th October. The day before I had fallen heavy after tripping on a uneven footpath while our for an easy run, tearing 2 layers of skin from the palm of my left hand (i'll spare you the gory photo). The strained hammy the following day may well have been a latent injury from the fall. My training over the following weeks primarily consisted of walking, reaching a new low of  6 miles for the second week of October - the only way was up.
As the hammy began to heal I decided to spend the rest of the year building up a solid base of aerobic endurance so that I could start 2015 in good shape. Over the next 8 weeks I covered 718 miles (average of 89.75 miles per week) setting my first 400+ mile (405) month in November. The most noticeable benefit was a reduction in the pace of my easy training runs, reducing from 8:45 to below 8:00 pace for a 120 Hr. I assessed my aerobic function by conducting a MAF Test on 2nd December, with a noticeable improvement compared to my only other MAF test for the year on 7th January. Some of that improved function was due to weight loss as I managed to cut most carbs out of my diet. Still the 578 heartbeats per Km is very encouraging (once I get below 600 I know I am in good territory). Although my weight starting out in 2015 is closer to what it was at the start of 2014 - that's the magic of December! 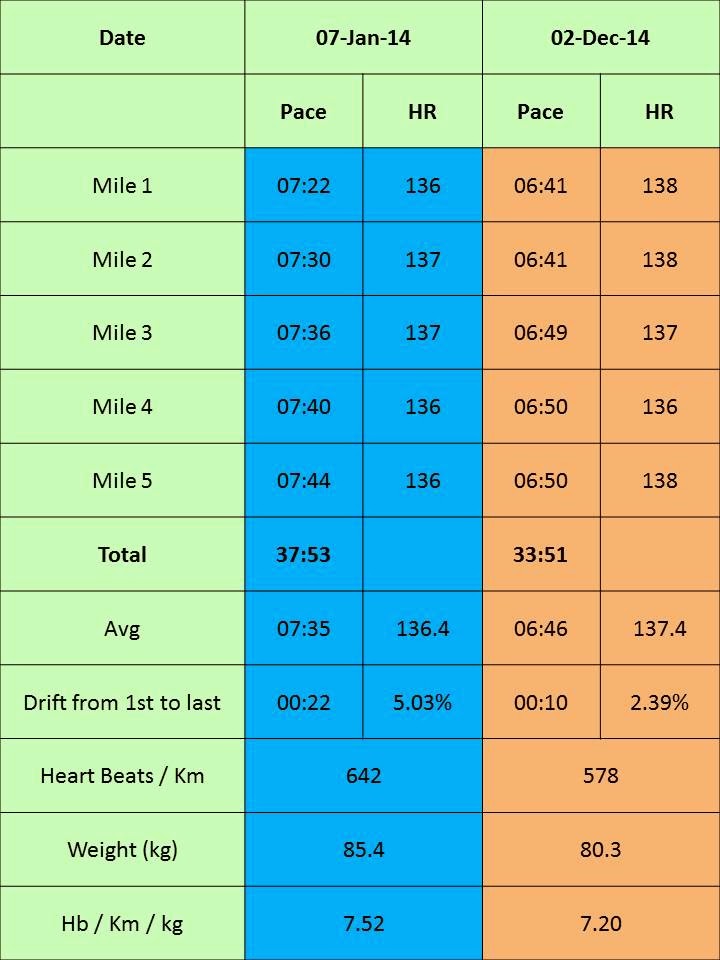 My only other race was the Clonakilty Marathon on 12th December, which I ran as an aerobic training run, starting off at a relatively comfortable pace, falling in with fellow Clon man Thomas Neville, with the initial target of pacing him to a 3:20 PB. However my competitive instinct got the better of me and after about 14 miles I  took off on my own to see if I could break 3:15. (we had hit halfway in 1:41 = 3:22 full). With 3:06 on the Garmin passing the 25 mile mark, I increased the effort, plunging well into the anaerobic zone to pull off my fastest mile of the day (6:16 - albeit on a net downhill) to get me across the line a few seconds under 3:14. Happy days! My endurance base ensured that I felt reasonably comfortable crossing the finish line, no longer daunted by the 26.2 mile distance.
Of course the main motivation for putting in the miles over the last few months was to cover 49 miles on Christmas Eve without suffering too much. As for last year I started a 4 in the morning and more or less ran continuously until I was back home with 49.25 miles on the Garmin - 7 hours and 17 minutes later. I ran all but 10 miles (Mile 15 to 25) in the company of Clubmates from Eagle AC - A big thanks to those who looked after me as it may not have looked liked I needed any help but the knowledge that I was not alone was all the motivation I needed to keep going. While I felt the fatigue coming on after 10 miles, it never got any worse and I more or less kept a consistent running pace for the full duration.

The Year That Was


2015 Targets
I have already signed up for my first marathon in 2015 although it's not until September. This marathon is somewhat unique though as i'll have to swim 2.4 miles and cycle 112miles just to get to the start line. Should be interesting - don't know how i'll fit in all the training. I'll have to find something else to keep me motivated for the first half of the year. With this in mind I have nearly committed to my second race in 2015 - another marathon on 14th March in Barcelona. I have booked the flights but haven't signed up for the race yet. This will be my third trip to Barcelona, the last time out in 2010 I struggled home in 3:10:28, after pulling up with a dodgy calf at mile 9. There are a few clubmates running it too so it should be fun. My training will start in earnest next week or the week after where I will be following the 10 week programme I used for Portumna last year. I had hoped to race the Dungarvan 10 during the first week of February as it fitted in perfectly with my schedule (HM race 6 weeks out). However the race sold out in less than two days, which I was not aware of until two weeks later - there were no such issues last year - West Waterford AC sent out email notification. I'll just have to find another longish race up the country.

After that I am spoilt for choice on the ultra front:-


My general plan is to build up endurance on the bike in preparation for the Ironman, which should stand to me for the long ultras. Time will tell.

Happy New Year to all and hope to see some of you out on the road in 2015.