The Road to Amsterdam

I rose this morning at 0600 for my last run of the week - The Long Run. I hadn't bought a new pair of runners since before the Cork Marathon in June and while I was feeling no ill effects, there must be well in excess of 600 miles on my current pair (closer to 1,000 i'd say - perhaps this built-in obsolescence is a cod after all). So I headed into town yesterday evening and bought myself a brand new pair of Asics Nimbus and two power bar gels. I got to Pairc Ui Caoimhe about 12 minutes before the scheduled 0645 Eagle AC meeting time so that I could do a quick out and back (1.8 miles in all) to test the shoes - no problems so drive on. There was 8 of us in all heading out the old passage railway line to passage, Monkstown and Rafeen before turning right up the only hill of the run (1.5 miles of it). The pace over the first 12 miles (including my solo 1.8 miles) to the top of the hill averaged at 08:02, which was the target pace for the run. However coming down the other side to the Rochestown Inn the pace went sub 8 minutes and stayed that way until the end. We took the long way back to the cars via the Estuary loop taking in Blackrock Castle and the Marina giving me 17.4 miles. Some bailed out here and some went on to do a few laps of the Centre Park Road/Monahan's Road loop (about 1.58 mile loop). I ran with John Desmond completing 4 loops which gave me 24.52 miles in all (22.72 for John - most went for 20 miles). Total time = 03:09:04 (07:43 pace @ 137 HR 155 HR at end) - last 12.52 mile @ 07:24 pace. Those power bar gels certainly seemed to have helped with the fuelling. John wanted to know what the marathon time would have been if we had maintained our finishing pace of 07:20 for another 1.7 miles. I figure it would have been 03:21:31, not bad for a training run. Rest day tomorrow. I certainly believe that rest and recovery (sleep) play a much bigger role in my training that I previously thought. In previous training cycles I would have gone out for a 10 to 13 mile recovery run the day after a long run just to get the weekly mileage up - not this time. Sat 20th Sept 24.52 Miles in 03:09:04 (07:43 Pace @ 137 HR) Marathon Week 12/16 - 65.6 Miles.
Posted by Grellan at 19:06 9 comments:

The photo below confirms my 01:24:30 HM finish time yesterday. 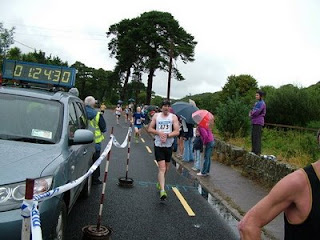 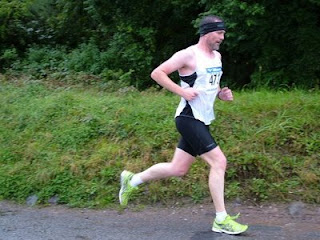 While my calves are a bit stiff from yesterday I feel reasonably ok. My recovery run will have to wait until this evening as I woke late this morning. Marathon Week 11/16 - 63.5 Miles Chasing Charlies Angels at 5 Miles.
Posted by Grellan at 13:47 6 comments:

From Wednesday to Friday I was attending a conference in Wexford at which I was giving a presentation. In the pub (aptly named the Undertaker - although I think that was the other profession of the publican - which is common in Ireland) on Thursday evening I got talking to a fellow runner, Richard, who is training for the Dublin marathon. I asked Richard was he doing the Blarney half on Sunday to which he replied "Do you think I would be here if I was?". "Maybe I'm not taking this seriously enough" I thought as I stared into my pint of Guinness.
.
Once we got talking about long distance runs, gels, hills, etc. the others in our group looked on as if we were from a different planet especially when Richard started talking about how addictive running can be. "Nutters" someone said as he passed by on his way from the bar - at least there was more than one of us. The following morning Richard gave me one of his "Go" gels that he swears by (doesn't need to be taken with water) So I'll give it a go in tomorrows half - Thanks Richard.
.
In terms of running I completed a 7.7 mile base/recovery pace run on Wednesday morning after the Tuesday mixed intervals.
.
The recovery week programme called for 2 x 2 miles @ HM pace for Thursday morning which I completed on an out and back run from the Hotel out the Rosslare Road. The first 2 fast miles were into a strong headwind and a net uphill which took a lot out of me. I was glad when I turned around and had the wind at my back for the return leg. the fast miles splits were:-
.
06:46
06:56 (uphill section into the wind was tough) - avg 06:51 pace outbound
06:25 (expected faster downhill with the wind)
06:18 - avg 06:22 pace inbound
.
Avg 06:36 pace overall.
.
Two easy 5 milers on Friday and Saturday mornings completed the week ahead of tomorrows Half marathon in Blarney which should see me get my first official sub-90 result - hopefully the first of three PB's between now and Amsterdam.
.
Wed 10th Sept
7.76 Miles in 01:02:41 (08:05 Pace)
.
Thur 11th Sept
9.1 Miles in 01:07:02 (07:22 pace ) with 2 x 2 miles @ 06:37 pace average
.
Fri 12th Sept
5 Miles in 39:42 (07:56 Pace) - TREADMILL
.
Sat 13th Sept
5.36 Miles in 45:56 (08:34 Pace) with Adrian, my old running partner.
.
Posted by Grellan at 10:47 6 comments:

This four week phase of my training programme ends with a recovery week leading to a HM tune-up race. As I have the Blarney Half Marathon next Sunday I have swapped weeks 3 and 4, taking the recovery week this week instead.
Sunday's recovery day was welcome as my calves were a little tight after Saturdays 20 miler. The tightness was still evident during Mondays base pace run over 7.7 miles but had eased by Monday evening when I churned out another 2.5 miles on the treadmill. I am being careful with not overdoing things so close to marathon day as it was at this stage in my previous training cycle that I developed ITBS, followed the week after by calf cramps which essentially prevented me from completing long (ITBS) and tempo runs (cramps) during the six weeks leading up to the Cork Marathon - just when I needed them the most.
This evenings mixed intervals at the track went off quite well particularly as it was a cutback session with 2k @ HM Pace, 1 Mile @ 10k pace, 1k @ 5k pace and 800m @ 3k pace. The times compared to those of 2 weeks ago compare reasonably well as follows:-

Have a good week. 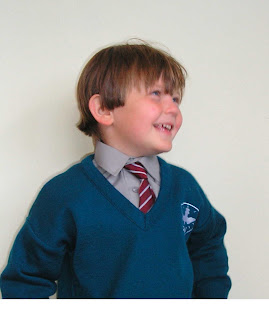