Back to the future

Time to burn off some fat................Having made my way through most of "racing weight" and read all good stuff about when and how often to eat relative to exercise (early and often), good and bad calories, partitioning (carlories that replenish fat, muscle & glycogen) the basic equation of balancing calories in against calories out remains the same. One interesting fact is that if I stayed in bed 24/7 i'd need about 1,858 calories per day just to keep the engine ticking over, without gaining or losing any weight. I wonder how many times a donut and cup of coffee goes into 1,858.
My primary strategy is to wait until my training load increases to match or overtake my calorie intake. Luckily this strategy is likely to work when training for an ultra. Keeping in this vein i've decided to keep things relatively slow over the next few months and spend some time base building to boost my aerobic conditioning. As my next key race is a 39 miler on April 11th I don't think speedwork needs to be top of my agenda for a while. In any event 4 to 6 weeks of speedwork is all I need for full anaerobic development.
I went back to this post from November 1998 for the technical bit. Essentially, while my main focus is on running long, I might as well stay on the steady, if somewhat gentle, aerobic progression curve (in green), leaving it until later in the year to develop anaerobic conditioning red curve). The great Lydiard himself is quoted as saying "The day you start doing anaerobic training and stop your (aerobic) conditioning, your performance level has been set for that season”. 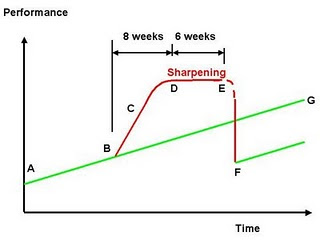 The first sign that my calf was on the mend came on Saturday of last week where I managed 13.5 miles on the grass of UCC Farm, with Pat Twomey for company, at just over 8 minute miles.

To give me some focus over the next few months I plan on broadly following Dr Maffetone's approach (as I did 2 years ago) with most of my running under 140 HR. This could get a bit monotonous so i'll have to vary my training to ensure boredom doesn't set (I may even break the rule once in a while but nothing strenuous). Thomas has been doing something similar over the last few months, exercising great restraint and has come out the other end a lean mean running machine. Ewen has just commenced a similar programme to mine so I am in good company. To monitor progress I will do a steady 5 mile run at a target 140 HR every few weeks. My first evaluation was at the track on Thursday which went off reasonably well:-

When I did this 2 years ago my average pace for the evaluation (@ 143HR) maxed out at 7:14 before falling back to 7:23, after which I returned to "normal" training. Looking back it was probably a bit premature as 1 poor result does not necessarily make a trend.

I finished my week at the Dungarvan 10 mile road race, travelling down in glorious, if somewhat cold, sunshine with John and Denis from the club. My garmin wasn't charged so I decided to run without any watch. My plan was to aim for between 75 and 80 minutes, which should be well within my aerobic range and shouldn't stress my calf too much. I quickly settled for a 7:30 opening pace (which would get me 75 minutes) as there was a gang going out at that pace. However that appeared to be an overall average pace as opposed to an opening pace as I was on my own for the first 5 miles despite hitting the halfway point in 36:40 (7:20 pace).

By mile 5.5 I was on the shoulder of Denis who was running very comfortably. If my calf held up I intended to push the pace a little over the last mile - shouldn't interfere too much with my aerobic conditioning. Denis and I ran a steady pace for the next 3 miles until we hit the main Cork Road with about a mile and a half to go. With a sniff of the finish line I couldn't resist the urge to open up the throttle a little and chase down a few hares in front of me, so I bid Denis farewell and gradually upped the pace. Given that I had saved my fastest miles till last and most of those around me had given their all in the preceding miles it wasn't difficult to pass them - felt a bit like a cheat really, although it felt good too ;). My natural instinct when I pass someone is to push the pace for fear of a counter attack. In normal races where I push from the start this natural instinct is counteracted by rising fatigue but in this case this muscle sapping fatigue was a long way off so my pace just kept on getting faster so that by the time the finishing chute came I was close to an all out sprint - finishing in 1:12:03 - a bit faster than planned but still waaaay off race pace and nearly 10 minutes off my PB from this time last year.

As usual the race was very well organised by West Waterford AC any everything went off without a hitch. Great event!

.....or two. Well that was the advice from Joe after he spent an hour and a half isolating and tenderising (I could think of other words) the soleus or one of the deeper muscles hidden behind the gastroc on my left calf (I know I said "right calf" in my last post but sometimes I don't know my ass from my elbow - hence the trip to Joe).
The tightness in my calf was there for the last 3 miles of a recovery paced 5 miler on Monday. Certainly speedwork was off the agenda for the week so I planned on 20 easy laps of the track on Tuesday evening so as to keep myself intact for the hilly club run scheduled for the Nagle Mountains on Sunday.....................and I couldn't even manage that, after 6 laps I had to pull up as the pain came on - no problem for the first 5 laps and suddenly the pain comes out of no where WTF - not a good omen.
Joe advised that I inflict some of my own pain on the affected muscle together with hot and cold therapy but for some reason while I can tolerate a reasonable amount of pain inflicted by others my central governor refuses to sent the correct signal to my hands to inflict anything resembling the same pain intensity. So it is "gentle" massaging with alternating hot water bottle and ice cubes in front of the telly for a few nights - I could get used to this sort of training.
.
While I could hypothesise on the cause (insufficient training/recovery from a 45 mile day, a long hilly run both before and after the Bandon 5 miler, most likely a combination of all of the above) it couldn't have happened at a better time - i'm still 3 months out from Connemara (which, in any event, I may use as a stepping stone for something longer!) and the Dungarvan (2.5 weeks) and Ballycotton (7.5 weeks) 10 milers are only fitness gauges along the way with the enjoyment of taking part being the main attraction.
.
I have used the downtime to get back in the pool for a few short swim sessions for the first time in months. Glad to have the choice as I have neglected the "other" disciplines for too long - looking forward to the weekend bike ride already!
Mon 10th Jan
5.27 m @8:26 pace & 130HR
Tue 11th Jan
1.34 m @ 7:50 Pace & 130HR
Wed 12th
Swim 1k with 10 x 50m off 70 second starts.
Thur 13th Jan
Swim 1k with 5 x 100m off 135 second starts.
Posted by Grellan at 19:55 4 comments:

Truth is that the I spent more time drinking wine than running over the past week. A marathon session on Friday left me in great spirits - until Saturday morning.
.
A slight twinge in my right calf towards the end of the Club run on Monday carried over to Tuesday's track session where I bailed after the first of my 3 x 1 miles - no big issue, just not talking any chances. My next run was an easy 5 miler on Friday which went well.
.
Despite the relative inactivity I still managed a PB in the 100m last night - in fact I smashed the world record, crossing the line in 9.23 seconds, beating my 12 year old daughter into 2nd place. I also managed a world record in the javelin - 103.xx m but couldn't get off the ground over 3 attempts at the long jump. All this activity, without a proper warmup, saw the return of the tightness to my right calf so I put off my long run this morning, knowing that it would be of no benefit.
My world record didn't last too long:-
Posted by Grellan at 20:07 4 comments:

I headed to Bandon this afternoon for the annual Bandon AC 5 mile road race. While I am no where near good form I just needed to get used to some fast running as speedwork has been on the back burner for the last few months.
I started out with Clubmate Denis, both of us aiming for sub-35 (7 minute miles). We banked some time in the first downhill mile - 6:13. Through the town at 7 minute pace for the relatively flat second mile, left past the GAA club and out the Kilbritain Road - 7:03. The third mile was largely uphill so we kept the effort the same and eased off the pace. Through halfway in about 17:10. Mile 3 in 7:25.
Once the hill was crested it was largely downhill or flat to the finish so with the body feeling comfortable I eased up the pace and slowly reeled in a few runners in front of me. I could see Dan Kennedy of St Finbarrs AC about 50 yards ahead and set him as a target to reel in. It took some time to gain ground and I was still behind him at the 4 mile mark - mile 4 in 6:21. However I was gaining ground and still felt reasonably ok so I was able to push the pace further and slowly reeled in Dan and a few more in front of him making sure to pass quickly so as to minimise the risk of a counter attack. I passed my last target with about 250m to go and could hear them coming back at me - so I pressed on the accelerator and found more fuel in the tank and sprinted for the line - 32:58 (Mile 5 in 5:56). Not my best result but a great way to run a race and glad to see that I had some speed in my legs.
Denis came in shortly afterwards in 34:44 easily getting under his 35 minute target and holding off a last minute challenge by clubmate John Quigley. 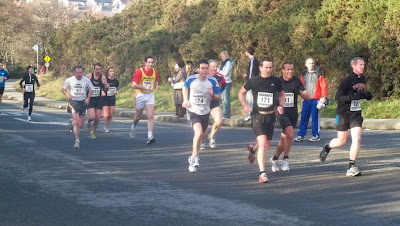 A quick mile warmdown back to the car with no time to stop for refreshments as I had an afternoon of felling and cutting trees planned with Adrian. 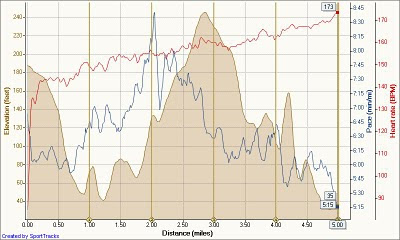