This is a much shorter post. I was awake at 11 last Saturday morning, ready for the day ahead. While my legs were not too bad my whole body felt tired and washed out.............. no more than what you'd expect after a midnight marathon and a few hours sleep. Trouble is that I had put my name down for the Clonakilty Marathon Director's Invitational on Sunday morning and as it is my home marathon I could not leave it go. How difficult could it be. My philosophy was to test my endurance.......a bit like a mini version of the 10 in 10 coming up in Sixmilebridge next week. This should be a piece of cake compared to that, so my mantra was to "man-up".

I Drove down with clubmate John D and joined the small crowd (about 12) at the start line in Clon on a mild sunny morning. Two guys, Shane and Brian, were even more hard core than I, having squeezed in a trail marathon along the banks of the Royal canal which started at 1 on Saturday, 13 hours after they started the midnight marathon - 3 marathons in 2 days!!!

My only plan was to run a sub 3:47 (my first and slowest marathon). The problem was that I left the Garmin at home...........no problem - race marshal, mobile water station volunteer and finish line timekeeper, Killian Walsh came to the rescue, giving me a loan of his Garmin 610 (much more sophisticated than my 305).

Once the legs thawed out over the opening miles John and I kept a reasonably consistent effort over the 26.2 miles, taking in the coastal scenery that never fails to impress, eventually feeling the fatigue, which always creeps up on you, over the last 10k. We pushed the pace over the last few 100 yards to get under 3:38 - stopping the Garmin at 3:37:40. We refuelled on sugary coffee/tea and granola bars, while I also had a shake made up of apple juice and protein powder to get the muscle repair going as soon as possible. A very pleasant run - more like a very long club training run than a marathon. The "recovery" week after Portumna turned out to be my highest mileage week this year with 80 miles on the clock. I gotta make use of all this endurance base I have built up. 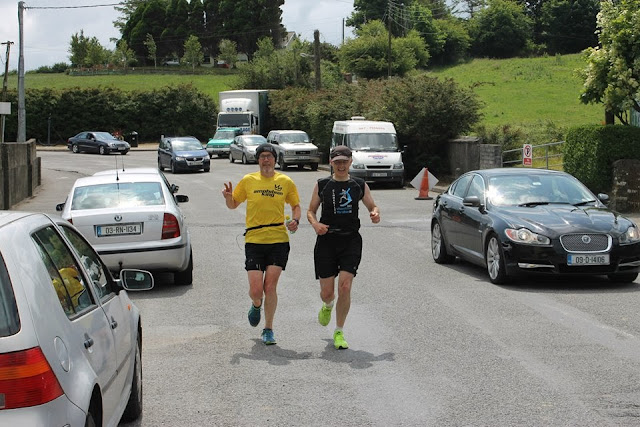