A PB on Christmas Day

On Christmas eve I took a rest day. It wasn't very restful though as it was my one and only day christmas shopping. At least I got it over with in a few hours. Abina got me a Garmin Sat Nav for my birthday so I found my way into town and back again without getting lost - apparently I can use it on my runs as it give speed and distance as well as telling me where I am going. Perhaps I could plot in a road running route - "at the next roundabout take the third exit on the R608". I can already hear the instruction. I think not!
On Christmass morning, after all of Santa's presents were unwrapped and the turkey was stuffed and put in the oven we (Abina, Safan the dog and I) headed for the CIT track for the Christmas morning Goal Mile where, following a contribution towards charity, everyone and their dog can run, jog, walk, crawl or trot the 4 and & bit laps (1609.3m to be exact) of the track. The miles started at approximately 15 to 20 minute intervals with the MC at the start/finish line calling out the time over a PA system. Those jogging/walking usually kept out of lanes 1 and 2.
.
I warmed up over 6 laps in the outside lanes. As there was a cold snap overnight some ice had formed in lane 1 on the third bend and two traffic cones were placed around it forcing runners out into lane 2/3 - less than ideal.
.
My target pace was 85 second laps (42/43 seconds every 200m) which should bring me in at around 5:40 for the mile. The mile before my race was won in 05:08.
.
We all lined up at the start line (not too crowded) and we were off. Surprisingly I took the lead from the start, a position I have never been in and that I did not feel confortable with as I knew at least 1 or 2 runners in the pack who were certainly faster than me. 200m in 38 seconds told me that I had set out too fast. I was still in the lead after the first lap (01:15). 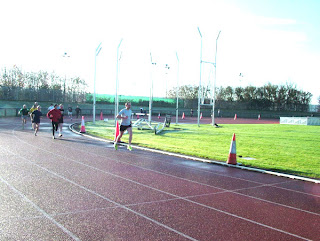 I knew that I would have to slow down, if I didn't want to blow up before the finish and that it was only a matter of time before someone would pass me. Lap 2 in 02:45 (1:30 for the lap - on for 05:30 pace). Coming down the back straight of lap 3 I was overtaken by three guys in quick succession, one of whom I knew ( He had run the mile in 05:25 last year). My pace, while nowhere near that of the first lap, was still steady (around 1;30 per lap) and reasonably maneagable. Approaching the end of lap 3 the MC was calling out 4:09/4:10. I was passed out by one more runner in lap 4. Nothing I could do about it - while my pace was steady, I could not increase it, it's a brain thing (central govenor holding back until the finish line was in sight). Coming down the home straight I could hear a guy bearing down on me and I managed to find the strength from somewhere to dig in and sprint for the finish line ahead of him. He gave me a clap on the back after we had crossed the line. 05:40 the MC called out as I crossed the line - bang on target - even if the pace had been a bit up and down.
.
I certainly felt comfortable going out at the pace I started at and the first lap did not feel as hard as the split time suggested. So there is certainly room for improvement. I did a 2.1 mile warmdown when I got home giving me approximately 5 miles for the day.