Maybe we'll............... life, at times, feels like a treadmill, with its repetitive and predictable nature where each day/week/month/year is indistinguishable from the next - you just get on with it without thinking of an end game. This is the frame of mind you have to get into when running a long distance - start thinking of the finish and you are setting yourself up for a very tough ride. Going into the Portumna 100k knowing that I was going to be on my legs for 9 hours or so I knew that 4 hours in I would get absolutely no comfort at all from thinking that I had only 5 hours left - so I had to get into the Forrest Gump mindset and think of running as a natural part of my existence as familiar as breathing, if it hurts, embrace the pain and make it part of who I am.

. Denis, our logistics man, having heard of our nights sleep before Connemara, booked a B&B 3 miles out of town, where Paul was staying. A 100m exclusion zone would have done, but Denis was taking no chances. . Breakfast consisted of a tin of ambrosia cream rice, courtesy of John, and a cup of coffee at the race briefing. The 100k was starting at 6 a.m., the 50k at 8 and the marathon at 10. There was also a 5k scheduled for 1 p.m. The course, a 5k loop through Portumna Forrest Park is shown below:- .

Denis dropped Paul and I to the start line with John the official photographer.

My nutrition consisted of 3 x 3 hour bottles of perpeteum (1 bottle premixed with water). coke, various gels, a flask of chicken noodle soup, endurolyte (salt) tablets, pancakes and caramel rice crispie cakes, percy pigs jellies and 2 bottles of vanilla ensure. Paul gave me a 500ml bottle of High 5 and 3 anti-inflamatories just in case (never took them before in a race). I ended up leaving most of the solid food in the bag, not because it disagreed with me but it just felt too much of a hassle to take and I was doing fine on the liquid refreshments - perhaps if I was going longer ;) 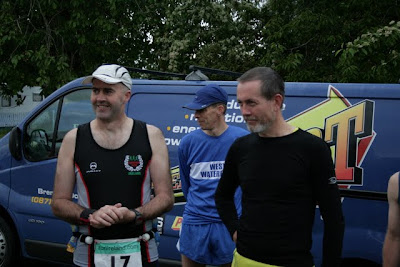 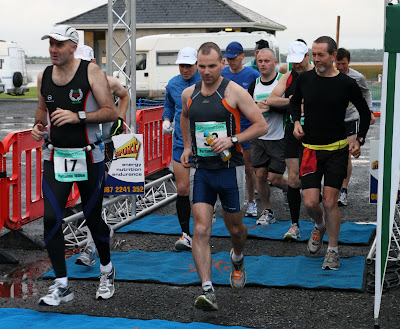 We toed the line at 6, no one pushing to get a quick start like you’d see in most other races. Then again with 13 starters it was unlikely that the potential front runners would be held up too much in the opening 100 yards. . Soon we were on our way and after 50 yards I found myself in 3rd place. However 50 yards later I had slipped to joint 6th, my only thoughts were on establishing my early pace of 8:50 miles. Paul had said beforehand that he would run the first 20 miles with me. I warned him that my early pace would be 8:50/9:00 dropping to 8:20/8:30 over 6 miles (2 laps). “That’s fine” he said. Yet within the first km he was gone – chasing down the three front runners – not wanting to be left behind. 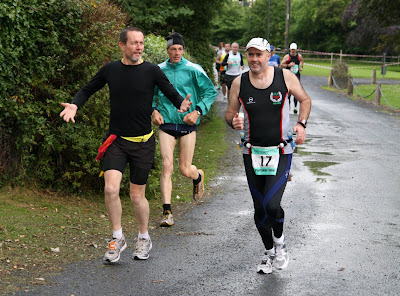 I ran the first few laps with 100 marathon club wannabe Pat O’Keeffe, who’s plan was to get a couple of “fast laps” in before he slowed down, with his primary aim of just finishing. He finished last years 100k in about 13 hours. .

I stopped after every lap to pick up nutrition and walk the short out and back over the timing mat, depositing my bottle back in my bag before resuming running. After about 3 laps I parted company with Pat and spent the remaining 85k running on my own, except for a brief interlude with Ger O’Brien, where I accompanied him on the last 1.5k of his first 50k ultra - well done Ger. 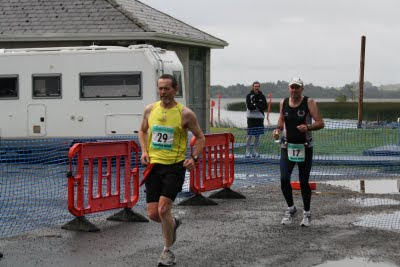 My first 5k loop had taken 28 minutes, reducing to 27 for lap two and then settling to an average of about 26 minutes for the next few laps. I was lapped by the front runner on completing my 4th lap – I couldn’t believe it – blistering pace for a 100k. I now had a marker for how the rest of the race would go for me compared to him. Assuming we followed the same progression curve he should lap me again at the end of my laps 8, 12 & 16 (laps 10, 15 and 20 for him.)

I was halfway through my 5th loop when the 50k started at 8 a.m. As part of the loop was an out and back section I had a good idea where I was relative to others. I could see the opening stages of the 50k coming against me as I headed in to complete my 5th loop – only 15 laps to go.

Paul was about half a lap ahead of me at this stage and we more or less remained in than relative position for the next 75km. The next 5 laps to the 50k halfway point were relatively uneventful. The lap pace was averaging 8:15 to 8:20 minute miles increasing to the 8:20s to take account of my “walking breaks” at the end of each lap. The second placed guy had lapped my just before the 30k mark (lap 6) – While this didn’t instill confidence I wasn’t upset as I knew I was still on target. If I felt good later I could always up the pace. Lap 8 came and went without the front runner passing me – I didn’t see him until lap 9.5 – proof enough to me that I was holding my own (relatively speaking).

My initial plan was to hold back until I had passed the 50k mark and up the pace for a lap and see how I get on, with the intention of starting the second 50k faster than the first 50 and holding on for even split race. With 4:26 on the clock at 50k I had a 4-minute cushion on my 9-hour target.

The pace gradually slowed which only became noticeable when the lap pace entered the 8:50’s after lap 12 (60km) going over 9:00 pace average when crossing the timing mat after my walking breaks. I accepted at this stage that I would not make my 9-hour target and after making a quick allowance for slowing even further pushed my target back half an hour to 9:30 with the big 10 looming in the back of my mind – while I felt reasonably ok I just didn’t know what the next 40k would bring – I had escaped relatively unscathed so far and who knows how long that would last.

I was surprised to see my heart rate, which had climbed into the 140’s, drop back into the 130’s suggesting that the “effort” wasn’t as tough as it had been. Was I taking it easy? Could I push the pace slightly? Just enough to get the HR back to where it was? I had never seen this in a race before – except in Connemara, but then only because I was injured and had to slow down. My legs appeared to be my limiting factor - as if the number of muscles available for recruitment was gradually reducing and there was noting I could do to change that. It would have taken a disproportionate amount of effort to increase the pace, not what I wanted to risk so far from home – maybe if the finishing line was within range but not 30 to 40km out.

While I could feel the dull ache of fatigue in my legs there was no huge discomfort or any sign of tightness. A dull pain had developed on the inside of my left knee, but it did not get worse. When I completed the lap I rummaged around in my nutrition bag for the orange anti inflamatories Paul had given me – all I could find was the dissolved remains of what appeared to be one tablet. The weather varied from full sun to heavy rain – I remember feeling the heat of the sun during one lap and reminding myself to apply sun screen when I next passed the start/finish area but by the time I got there it had started raining heavily and it didn’t seem appropriate to be applying factor 50. I enjoyed the cooling effect of the rain. My mind also began to play tricks on me - I remember at one stage picking up 2 gels from my nutrition bag and putting them in my short pockets and feeling like I had just added 2 bags of cement - the additional weight almost too much to bear – luckily the feeling wore off after a few 100 yards.

The marathon had started at 10 (4 hours in) and every so often runners would go flying past. I was also passing through the back of both the 50k and marathon field, particularly later on where quite a number of competitors were reduced to walking. John and Denis started crewing for Paul and I when they finished their 50k and we still had 5 laps to go (25k) – I was allowing 30 minutes per lap, telling John I had another 2 and a half hours plus to go - with 6:47 on the clock I was predicting a 9:20 to 9:30 finish.

At 1 p.m. (7 hours in) the 5k race started, but I hardly noticed the runners pass me as they appeared from a different world and it was all over in 1 lap. As I was walking in to complete my 17th Lap (85k) the 100k front runner came through to lap me for the 3rd and last time to finish well ahead of the field in 7:46. I came through 10 seconds later to claim 2nd place – no such luck but at least my spirits were good – only 3 laps or 15k to go - single digit miles! 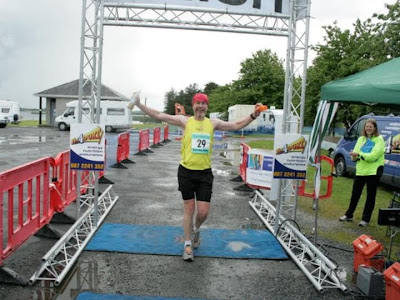 By this stage my pace had slowed to a pedestrian 10 minute mile – still glad to be moving forward and within sight of the finish, churning out mile after relentless mile. Coming in for the start of my last lap I felt great, joking that I had just arrived for the 5k race after a 95k warmup – I had waited a long time for this - the last time I would pass the now very familiar landmarks out on the course. My pace quickened temporarily but my new found energy was primarily psychological, not physical. I counted down the last 5k with a smile on my face. At 97km I even had time to take a gel that I found in my pocket. I had planned on doing a little dance coming into the finish line and going down on my knees to kiss the ground. However I don't think I pulled it off as gracefully as I had anticipated - but at least I had a smile on my face - 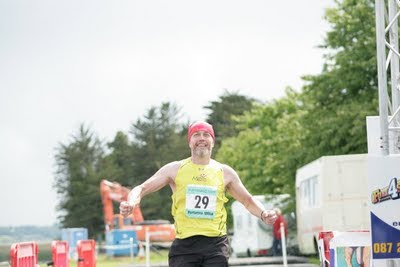 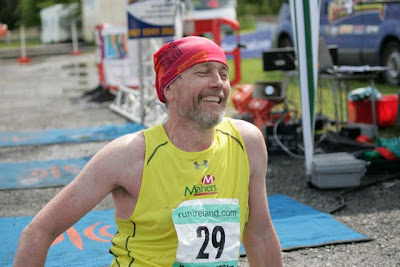 I didn't even get a chance to compose myself before getting my finishers medal. 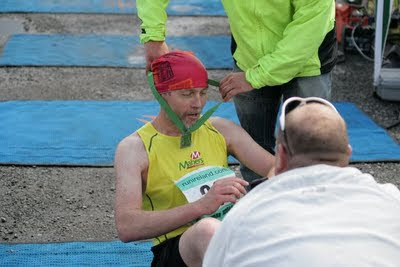 Official finishing time of 9:16:28 - Well done to Seb Locteau and his tream for putting on a great series of races.

My recovery has been a bit chequered, partly explaining why this post has taken so long, but more about that later.
Posted by Grellan at 22:21