Monday morning called for 10 miles in the park (well actually that's what I did - there is no call to do anything as my training plan is very loose, consisting of running as many miles as I can in week at between 130 and 150 HR while fitting in family, some relaxation, work and sleep and now blogging).
I had planned an easy sub 135 bppm run but after the warmup mile I upped the effort slightly to sub-8 minute pace. I felt strong and comfortable for the entire run finishing the 10 miles in 01:16:28 (07:39 pace @ 136 HR).
This evening called for a repeat of the HADD test I did on 10th July (5 weeks ago). This test is supposed to be a measure of how my aerobic conditioning is going and, for me, involves running 2,400m (6 laps of a track) at increasing heart rates of 130, 140, 150, 160 and 170 bpm with 90 second rests in between. As lanes 1 and 2 at the track are off limits I run in lane 3 covering 2,496 m in 6 laps (416m per lap).
Ideally the test is to be run in the same conditions (temperature, wind speed, humidity etc.) so that the only variable is my change in fitness. However the only constant in an Irish weather forecasters vocabulary is the word "changeable" and so it was today. My last test was run in warm sunny conditions with a light breeze. This evening was cooler with with a mixture of light rain, sunny spells and intermittent gusts of wind.
Apart from the weather there are three things you need to do the HADD test
1) A Measurable Distance - Check (I was on a Track)
2) A Time Recording Device - Check (I had my stopwatch)
3) A Heart Rate Recording Device - Check (I was wearing my HR Monitor)
I started off with a 1 mile warmup and then straight into my first test run at 130 HR, which went fine. I took my 90 second rest (HR down to 84) and started off on my second test run. It was from here on in that things began to slightly askew. The recorded HR began to jump into the 180's and drop down again. In addition it rarely dropped below 140 which meant that by the end of the 6 laps the average HR recorded was 142. This happened again for the next two tests with average recorded HR's of 154 and 163 as opposed to 150 and 160. During the final test my HR was showing 175 during the 2nd lap and at some stage shot down to 0 and up to 189 and then settled in the 150's despite the fact that the effort felt as difficult as it had 5 weeks ago. While the average recorded HR for the last test was 169 (same as last time) I couldn't rely on it. I'd want to get my HR monitor checked out (perhaps it needs replacement or an new battery)
For what it's worth I have set out the results and compared them to those of 10th July in the following table:- 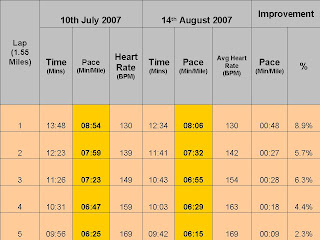 The results show an improvement at all HR's. However as the recorded HR's vary between tests and given the erratic behavior of my HR monitor they are not directly comparable. However I think the results for the first (130bpm) and last (170 bpm) test runs are comparable and show that I am taking a step in the right direction. Certainly the improvement at the lower HR is significant. However the first HADD test was only 5 weeks after the Cork Marathon and only one/two weeks into my return to serious training (previous 2 weeks mileage of 36 and 51 miles).


Between the test, warmup and warmdown I covered 10.75 Miles. I was contemplating taking the test in a week or two but may hold off until mid-September (another 5 weeks).
Posted by Grellan at 20:53