The results of the Portumna 50k give me an official 50k PB of 3:46:09 coming in 5th place, 13:45 behind 4th place and 13:47 ahead of 6th place - so well secured in that position over the final stages of the race. I certainly was in a no mans land as all those behind me were lapped by all those in front of me and I managed to avoid getting lapped at all. In fact the front runner, Mike Cunningham, was 5:54 behind me after I went through the 25k point (Lap 5) yet when he came in to finish his final lap I had gone through the start/finish for the penultimate time 4:53 before him - so he only gained a minute on me over 20k. 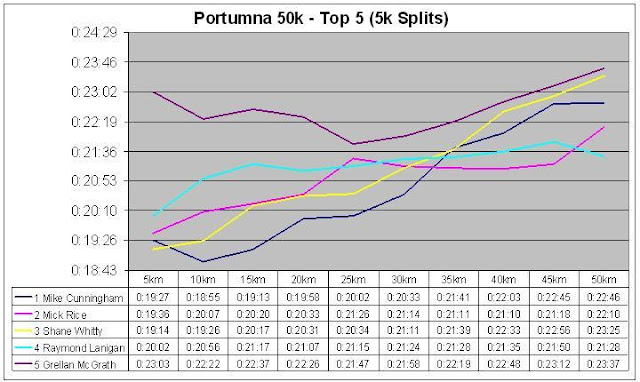 The splits of those behind me show similar fades over the closing stages with the exception of Nigel Campbell, who came in 11th position with a whopping 8:12 negative split climbing 10 places in the second half of the race - still not enough to trouble me though ;-) - although his last 5k split was 23 seconds faster than mine. You'd have to wonder would he have got a better overall time if he had headed out a bit more agressively and achieved more even splits - the eternal debate as to what is the best pacing strategy for a race. 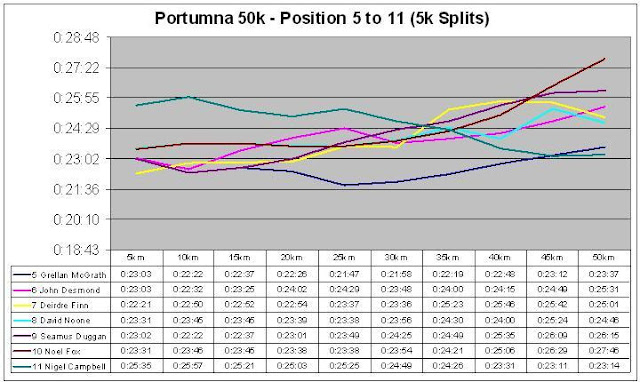 Peter Mooney, who's has a fine collection of photographs of the race on Flickr kindly e-mailed me the photos below. The full collection of photographs can be viewed HERE. Peter and his brother Rory dominated last years Marathon taking first and second spots in 2:50 and 3:03. This year, fresh from a 2:41 and 2:57 marathon in Cork they only managed first and fourth spot in 2:48 and 2:56 respectively.  At the end of next week they are both headed to Waterford for another pair of sub 3 hour marathons no doubt. There must be something in the Mooney genes. See you on the start line.

My recovery has gone quite well, with an easy 5 miler at 7:29 pace last night showing up no residual aches and pains. There were some mild aches in the quads when walking downstairs on Sunday and Monday but nothing as severe as those typically associated post marathon DOMs. A repeat of last weeks short fast VO2Max intervals at the Track this evening were completed at a slower pace, reflecting reduced energy as much as anything else.