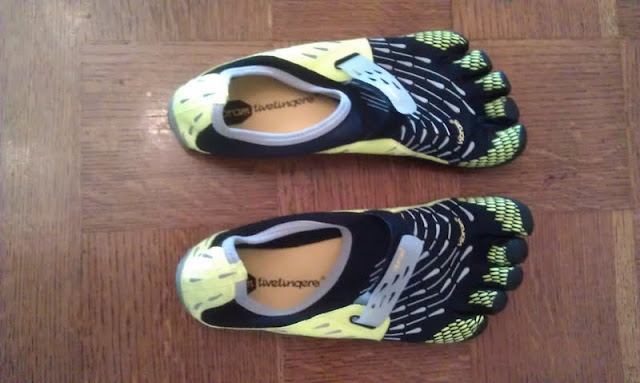 This is long overdue..................
To qualify this review I have to add that I am generally in favour of minimalist/barefoot running and have run in a pair of vibrams Sprints on and off since December 2007. So this is not a debate about the pros and cons of minimalist running shoes but a review of the Vibram Seeya against my experience of running in minimalist shoes, limited though it is to the sprints.
The Vibram Seeya is billed as the minimalist’s minimalist shoe “designed to bring you even closer to the barefoot sensation” by radically reducing the overall weight. To be quite honest when I took delivery of a pair from Owen Loughrey of barefoot.ie to trial back at the start of June I did not think them any lighter than the pair of sprints. In fact the mesh upper enclosed my feet more that sprints ever did and the sole looked bulkier than the neoprene sole of the sprints. 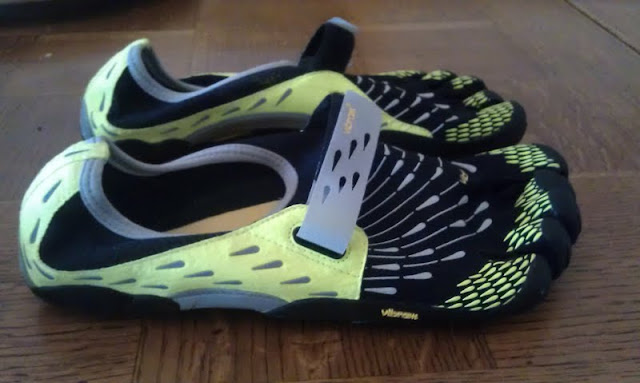 Initially I found the Seeyas more difficult to put on that the Sprints as I was used to being able to  manoeuvre each toe into position using my hand if I had to, which was made much more difficult by the mesh upper of the Seeyas. However after a while I discovered that all I had to do was to place my feet half way into the shoes and wriggle my toes into position to get a snug fit, such was the flexibility of the upper which is like a stretchy sock. The presence of a Velcro fastening strap over the top of the foot seems like an unnecessary afterthought as the mesh upper should be sufficient to hold the foot in place. My feet certainly felt secure without fastening the strap. Perhaps it offers extra insurance to those who like a bit of security or maybe it’s there in case the fit is not as snug for everyone (e.g. narrow foot width). Either way it did not bother me and the strap never caused me any problems. Although if it is billed as the lightest of the vibrams it could be made that bit lighter by removing the strap.
I did notice that once or twice during my first few runs that the light heel structure gave the impression that the shoes were going to slip off but this feeling did not last and after a week or two I did not even notice it.
Perhaps because the shoes enclosed my feet more I felt much more comfortable wearing them around the house and on occasion out and about, despite the luminous green colour, which was a source of embarrassment to my impressionable 13 year old Daughter. In fact I sometimes forgot I was wearing them and wore them doing the gardening once or twice, but they are not very good for footing a shovel as I was painfully reminded when I tried – not much cushion between my sole and the top blade of the shovel.

The short video below compares putting on the Seeya compared to the Sprint, which does require a bit more manipulation to get a proper fit as the upper is less flexible than that of the Seeya (The black toenails are a relic from my ultra days).

The Seeya is billed as a road running “shoe” only, perhaps because of the limited grip available for off road running. This suited me fine as most of my experience in running in vibrams was on the road.

Initially it was difficult to compare my experience of running in the Sprints with that of running in the Seeyas as both gave a pretty similar feel. As with the Sprints the Seeyas felt great to run in, the same feeling of lightness and freedom around my feet, fully in touch with the surface underneath, feeling every indentation. I did not feel that the Seeyas were any more minimalist that the sprints although they were billed as suitable only for experienced minimalist runners, whatever than meant. While I had run on and off in the sprints over the last 5 years I could not be considered a serious proponent of the minimalist running culture as I have run 90% of my miles in more conventional running shoes and up until this year never raced in the vibrams.

Running in minimalist shoes does change the way my feet and legs react to the stress, with my calves in particular taking more of the strain. This is certainly more noticeable the faster I run. Up until 2012 most of my running in vibrams had been at a slow easy pace. I had used the vibrams before in races but had not pushed myself too hard. In 2012 I ran a couple of 10 milers in the sprints and came within 8 seconds on my PB in Ballycotton in March. However I paid the price with rock solid tight calves afterwards that prevented me from warming down.
After a few introductory runs with the Seeyas I began using them for some of my quality training runs as the light weight and feeling of freedom encouraged me to run faster and it felt good. The idea was to train for a few short 4 and 5 mile races over the summer and see how the Seeyas performed in a race compared to my more traditional racing shoes. However this plan had to be put on hold in early July as I was laid up for over 2 weeks with a right calf strain, a few days after pacing the Waterford Marathon (in my more traditional Asics).  A return to running in late July lasted for only 2 weeks with the calf injury returning. After a return to running in late August I  again succumbed to injury in late September which prevented me from running until Mid-October. It wasn't until I analysed my training log that I noticed that a few days before the onset of each injury I had completed a steady/tempo run in the Seeyas and while I can't say for sure that they were responsible for my injuries i'm pretty sure there is a link. Perhaps I ignored the health warning that they came with .........."suitable only for experienced minimalist runners"............
Running in minimalist shoes , including the Seeyas, requires acclimatisation over time -  building up from short slow runs, waiting a few day to see how your legs react and incrementally increasing the stress (pace/distance) over weeks and months to allow your muscular skeletal system adjust to the new stresses. My problem is that I'm not consistent and could go a month or two without running in the vibrams and effectively "de-training" my muscular skeletal system only to pick it up again thinking that I could start form where I left off. The Seeyas taught me that this only leads to injury.
Conclusion
In conclusion the Seeyas fit like gloves, are easier to put on and feel more comfortable than the Sprints, making me more likely to wear them around the house (like slippers) and are great to run in. On the flip side they offer minimal protection and are likely to cause injury if you do not use them intelligently  (more so than the Sprints).